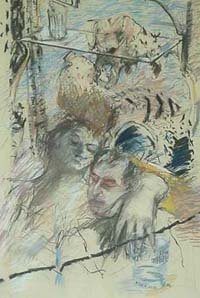 William Kentridge earned a B.A. in politics and African studies in 1976 from the University of the Witwatersrand in Johannesburg. From 1976 to 1978 Kentridge studied fine art at the Johannesburg Art Foundation, where he later taught printmaking, and during 1981-82 he completed a course in theatre in Paris.

In the mid 1970s, Kentridge became active in film and theatre, working as a writer, director, actor and set designer for numerous productions. He was a founding member of the Junction Avenue Theatre Company, based in Johannesburg and Soweto from 1975 to 1991, and of the Free Filmmakers Cooperative, established in Johannesburg in 1988.

In 1979, Kentridge had his first one-person exhibition at the Market Gallery in Johannesburg. He continued to exhibit his drawings and prints throughout the 1980s. In 1989 Kentridge made Johannesburg, 2nd Greatest City After Paris, the first in a series of short animated films featuring Soho Eckstein - Johannesburg 'property developer extraordinaire' - and Felix Teitlebaum, his alter ego - 'whose anxiety flooded half the house'. Created from the artist's successively reworked drawings, the film premiered at the Weekly Mail Film Festival in Johannesburg and was later screened at the Institute of Contemporary Art, London. Subsequent films in the series include Monument (1990); Mine (1991); Sobriety, Obesity and Growing Old (1991); Felix in Exile (1994); History of the Main Complaint (1996); WEIGHING… and WANTING (1998) and Stereoscope (1999).

Kentridge collaborated in 1992 with Handspring Puppet Company to stage Woyzeck on the Highveld, based on an unfinished work by German playwright Georg Büchner, and combining puppets, animation, and live performance. The production won numerous theatre awards and later toured Europe. The artist and Handspring Puppet Company subsequently created the multimedia theatre productions Faustus in Africa! (1995), Ubu and the Truth Commission (1997) and the multimedia opera Il Ritorno d'Ulisse (1998), based on the opera Il Ritorno d'Ulisse in Patria by Claudio Monteverdi.

Kentridge has been featured in numerous one-person and group exhibitions. In 1990, his work was featured in Art from South Africa at the Museum of Modern Art, Oxford, England. In 1993, the Edinburgh International Film Festival presented a retrospective of Kentridge's films, and The Museum of Modern Art in New York, and the Centre Georges Pompidou in Paris both screened Sobriety, Obesity and Growing Old. Retrospectives of the artist's films have subsequently been screened at the Festival International du Film d'Animation, Annecy (1995); Festival du Dessin Animé et du Film d'Animation, Brussels (1996); Culturgest, Lisbon (1996); Internales Trickfilm-Festival, Stuttgart (2000); and the New Zealand Film Festival (2000). In 2000, Sobriety, Obesity and Growing Old was selected as one of 84 animated films in the programme Jewels of a Century.

Also in 1993, Kentridge participated in Croc del Sud at the 45th Venice Biennale. In 1995, he exhibited multimedia collaborative work in Africus, the first Johannesburg Biennale. He was featured in Jurassic Technologies Revenant (1996), the 10th Sydney Biennale; Documenta X (1997) in Kassel, Germany; and Truce: Echoes of Art in an Age of Endless Conclusions (1997) at SITE Santa Fe in New Mexico. In 1998, the Museum of Contemporary Art, San Diego, and Palais des Beaux-Arts in Brussels both presented one-person shows of Kentridge's work; one-person shows have since been seen also at Kunstverein München in Munich (1998), Museu d'Arte Contemporani in Barcelona (1999), and the Serpentine Gallery in London (1999).

1998 also saw the artist selected as a finalist for the Solomon R. Guggenheim Museum's second Hugo Boss prize. In 1999, Kentridge presented Stereoscope, eighth in the Soho Eckstein film series, at the Museum of Modern Art in New York; and was included in d'APERTutto at the 48th Venice Biennale. He was awarded the Carnegie Prize at the Carnegie International 1999/2000 in Pittsburgh. 2001 saw the launch of a substantial survey show of Kentridge's work at the Hirshhorn Museum in Washington, travelling thereafter to New York, Chicago, Houston and Los Angeles during 2001/2002. Kentridge's most recent theatre production, a shadow oratorio in collaboration with Handspring Puppet Company, composer Kevin Volans, and writer Jane Taylor, was seen at Documenta XI, 2002, as was an associated film installation.

In October of 2003 William Kentridge received the Goslar Kaisserring in recognition of his contribution to contemporary art. Projects for 2003 included a commission for large bronze figures for the Art Gallery of Western Australia in Perth, a survey exhibition which opened in Turin in January 2004, planning for an exhibition to tour venues in Japan, China and Korea, and preliminary work towards a production of Mozart's Magic Flute, scheduled for 2005. Kentridge's work is rooted in Johannesburg, where he continues to live today

William Kentridge was born in Johannesburg, where he continues to live and work today.