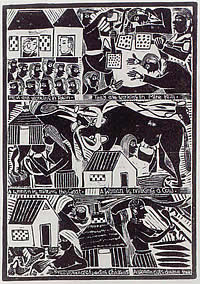 Muafangejo was born at Etunda lo Nghadi, Angola in 1943. He grew up in a traditional homestead herding cattle during the day and playing communal and literary games, with their strong moral and philosophical content, with the elders in the evening. This period of his life clearly influenced not only his development as an artist but also the content of his work forming the basis of his strongly autobiographical subject matter. Following the death of his father in 1955 his mother inherited nothing and so moved to a mission station where John joined her in 1957. He converted to Christianity at the age of fourteen and in 1964 attended St Mary's Anglican mission school at Odibo in Namibia where his artistic skills were recognized and arrangements were made for him to train at Rorke's Drift. He trained at Rorke's Drift from 1968 to 1969 before returning to teach and establish an art school at St Mary's. In 1971 he held his first of several solo exhibitions in Windhoek and represented South Africa at the Sao Paulo Biennale. In the same year he applied to attend the Michaelis School of Art in Cape Town but his application was rejected. In 1974 he took up at the position of artist-in-residence at Rorke's Drift. At this time he produced unique colour woodcuts.

In 1975 he held his first solo exhibition at the African Art Centre in Durban. In 1976 he participated in the Brooklyn Museum's exhibition 'Black South Africa: Graphic Art'. Muafangejo returned to Namibia in 1977. In 1981 he was invited to participate in the Graphica Creativa Third International Exhibition of Graphic Art held at the Alvar Aalto Museum in Finland. Through the 1980s his work was also exhibited in England and Germany. He died in 1987 at Katutura Township outside Windhoek in Namibia. In 1988 the National Arts Festival in Grahamstown, South Africa, hosted a retrospective exhibition of his work. A second retrospective was held at the Museum of Modern Art at Oxford in England and toured the country between 1990 and 1992. As a result of this he was the subject of a documentary on Channel 4 in 1991 and in 1992 Orde Levinson's 'I was Lonelyness, a Catalogue Raisonne of his Graphic Work' and 'The African Dream, Visions of Love and Sorrow: the Art of John Muafangejo' were both published. Muafangejo is best known for his linocuts of figures, religious and historical scenes. His images have a strong narrative quality and his illustrations of African traditions often have an explanatory script. His work can be seen in public galleries throughout South Africa.