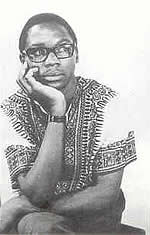 Shilakoe was born in Barberton, Mpumalanga. He grew up on Bushbuckridge mission station with his grandmother as his parents were migrant workers. When she died in 1962 he moved to Soweto. He was one of the first class of students to attend the Fine Arts course at Rorke's Drift studying there from 1968 to 1969 and he was one of only two with experience of urban life. He established a studio at St Ansgar's mission in Roodepoort and held his first solo exhibition at the Goodman Gallery in Johannesburg in 1970. Between 1968 and 1972 Shilakoe produced 80 prints. Shilakoe participated in numerous group exhibitions in Sweden, Germany, Denmark, Italy, England, USA and Australia. He had been awarded first prize for printmaking at an exhibition held at UCLA when he was killed in a car accident in 1972. He saw himself as an important recorder of events that affected black South African's as he felt that there was nobody who captured their history at a time when black people formed a majority. He was awarded the Standard Bank National Arts Festival's third guest artist award retrospectively in 1990. Shilakoe developed a unique style. His figures have an ephemeral and mystical quality about them. In addition, he developed his technical skill to the point that he could paint with the acid on the plate so create variation in a print work. He also produced etchings and aquatints to depict township scenes and African legends. He also worked as a sculptor. Shortly after his death in 1972 the Goodman Gallery in Johannesburg held retrospective of his work in 1973.